The level of personal debt accrued by the average Dundonian is falling – but those in dire straits are still shouldering sums in excess of £14,000.

Figures provided by the Citizens Advice Bureau Dundee show the average level of unsecured debt held by those seeking advice is £14,834.

She has urged those having problems with debt to get help as soon as possible.

“Council tax debt and credit card debts are the most prevalent, followed by loans and overdrafts,” Tracy said.

“Our experience is that clients are using several credit cards to fund their day-to-day living costs such as shopping, utility bills and travel costs.

“Once they have maxed out these cards they are at crisis point and that’s usually when they approach us for assistance.

“We would encourage anyone experiencing money issues to seek assistance sooner rather than later.

“They may be missing out on benefits they could be claiming which could maximise their income, and be given assistance with financial budgeting.” 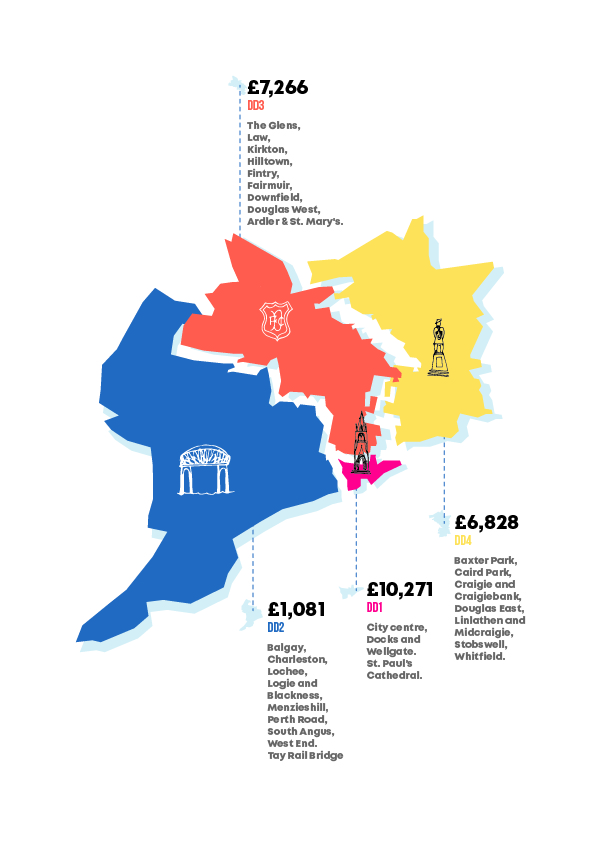 Dundee Debt Map – An infographic by the team at Creditfix

Analysis of longer-term trends suggests that, despite the enormous amounts of debt being incurred by locals, the average is lower than in previous years.

Figures provided by the insolvency agency CreditFix show levels of debt last year were similar to the most recent figures from Citizens Advice – £14,210.60.

However, with the Christmas shopping season approaching, families could soon be feeling the pinch again, according to Stephanie Chapman, managing director at debt agency Carrington Dean.

She said: “If spending continues to rise, there could be a further spike in outgoings, leaving a lot of people short for the festive period.

“As families now turn their focus to Christmas, they may start to see the impact of an expensive summer and consequently become more reliant on credit.”

Judy Murray: A day of hope, fresh starts, and fresh faces, sent a message of unity we can all support

There’s been lots missing from everyday life lately, from hugs and handshakes to dinners and dates, and one very big emotion has been lacking, too – hope.

Ministers have ordered the first scientific research into the impact, if any, of delaying the second dose of Covid vaccine amid mounting concern, we can reveal.

Coronavirus comparison: How Scotland and England have done things differently

It was a lovely thought. Four nations united in concerted purpose with a single goal, each pulling together, apart but together, to conquer Covid.

“At the start of the crisis we did see politics set aside, but the longer it has gone on we have seen that creeping back”

The UK’s four nations must forge a more co-ordinated approach to easing the country out of lockdown or risk infection rates rising, according to an expert on devolution.